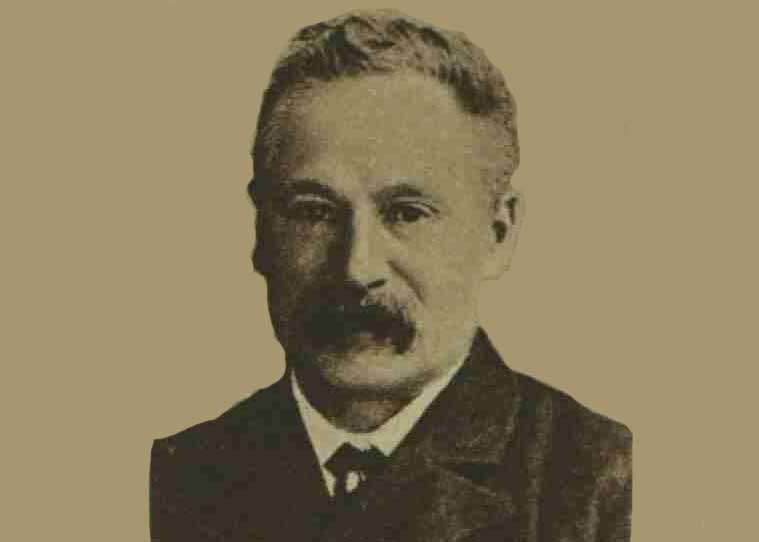 One hundred years after his death and Wynne Edwin Baxter is a name that is still well known by the people of Lewes. He was a remarkable figure, and we know him best as the lawyer that founded the legal practice that is now Mayo Wynne Baxter. What many people may not know, is he was also a translator, antiquarian and botanist. However, he is probably best known as the Coroner who conducted the inquests on most of the victims of Jack the Ripper, as well as on Joseph Merrick, better known as the "Elephant Man".

Wynne, the eldest of six children, was born to William and Anne on 1st May 1844 in Lewes. His father was a printer and publisher, and the sign of W E Baxter Ltd can still be seen on Lewes High Street.

Wynne was educated at Lewes Old Grammar School and privately in Brighton. He studied law and was admitted as a solicitor in 1867 starting his first legal practice on Albion Street in Lewes. Never one for idleness, Wynne held a host of public offices including Vice-President of the Provincial Newspaper Society between 1871 - 1877. He was appointed Junior Headborough for Lewes in 1868, Under-Sheriff of London and Middlesex from 1876 - 1879 and again 1885 -1886, Junior High Constable of Lewes in 1878, and the last Senior High Constable in 1880. In 1881 Wynne Baxter became the first-ever Mayor of Lewes.

Wynne Baxter moved to London in 1875 where he opened a second solicitor's practice and an advertising agency in Cannon Street. He maintained the law firm in Lewes, which was eventually run by his son,.

Following his admission to the bar at the age of 23, Baxter immediately became in demand in Lewes. He was appointed solicitor to Lewes Co-operative Benefit Building Society on its formation in 1870, a position he held until his death. In later years his son Reginald 'Reggie' Truscott Baxter ran the Albion Street offices and carried out the duties for the Society. Over the years Wynne Baxter was to become a member of the Law Society, the Law Association and the Solicitor's Benevolent Association too.

In 1875, Wynne Baxter moved to London, starting another solicitor's practice at Cannon Street E1 and an advertising agency under the name Baxter & Co at the same address.

By 1880, he was busier than ever with his Coroner duties, so Baxter took on Henry William Hennicker Rance as a partner. The new firm, Wynne-Baxter and Rance, steadily grew until 1886 when the firm admitted Edward Meade as a third partner, renaming as Wynne-Baxter, Rance and Meade. This partnership lasted just two years before the three went their separate ways with both Rance and Meade deciding to form their own practices. In 1888 Baxter employed a newly qualified solicitor Jasper Keeble, and eventually renamed the firm Wynne-Baxter and Keeble. The firm proved extremely successful and continued working under the same name beyond both Keeble's and Baxter's deaths.

Wynne Baxter was appointed Coroner for Sussex on 29th January 1880 and in 1886 was also the Coroner for East Middlesex. He relinquished the Sussex post in 1887 as the demands on his time were such that he felt unable to successfully handle both roles. During these seven years in Sussex he presided over hundreds of local cases, most famously the inquest into the murder of retired corn merchant Frederick Gold by Percy Lefroy Mapleton on the 2pm train from London Bridge to Brighton, on 27th June 1881. The Daily Telegraph made newspaper history by publishing the first likeness of a wanted man and Mapleton was eventually captured in Stepney and hanged at Lewes on 29th November 1881. Baxter also conducted the murderer's inquest.

By 1885, Wynne Baxter was also a Deputy Coroner for the City of London and Borough of Southwark. On 13th December 1886, he fought a fierce campaign against Dr Roderick MacDonald to be elected as Coroner County of Middlesex (Eastern District) with 1,401 votes, to MacDonald's 1,069.

He was very proud of his long period of service, and in 1907 Baxter commented: "I have held over 30,000 inquests and have not had one body exhumed yet".

Wynne Baxter played a key judicial role during the Whitechapel Murders of 1888 – 1891. He conducted the inquests into the deaths of Annie Millwood, Emma Elizabeth Smith, Polly Nichols, Annie Chapman, Elizabeth Stride, Rose Mylett, Alice McKenzie, the 'Pinchin Street Torso' and Frances Coles. Around this time Baxter became well known across the country and was in the newspapers almost daily.

Baxter's own theory was that the murderer was attempting to obtain specific female organs for sale to doctors.

His career and other public roles must have left him with very little spare time, but despite that, Baxter had numerous other interests.

Baxter collected the works of John Milton and was considered one of the country's leading experts on his life and works. Following his death, his extensive collection of Milton works, rare English and Italian books from the 16th and 17th Centuries was auctioned by Hodgson & Co in July 1921. The catalogue lists 583 items, including an 11th-century psalter and a 13th-century Bible.

A 1909 issue of The Bibliophile gives an insight into his home and books at 170 Church Street in Stoke Newington:

"For twenty- or thirty-years Mr Wynne Baxter has been amassing - I use the word in no derogatory or greedy sense - a library of works by and on the second greatest figure if all our huge army of men of letters. You are welcomed by a bust of Milton, you leave with a bookplate on which is engraved his portrait. There is no putting old wine into new bottles in this collection. The old volumes are in an old house. It was built in the reign of Queen Anne, and formerly sheltered Beaconsfield's grandfather. Isaac Disraeli, Leach, Dickens and Thackeray have hallowed it by their presence. Would that the walls could re-echo the kindly chat of the compiler of Curiosities of Literature, and the writer of Vanity Fair. And the huge iron chair, at the back of the door in the hall could unfold many a romance of the days of highwaymen and such-like worthies."

He also studied the Diatomacae (microscopic plants) and his keen interest in microscopy led to his translating and publishing, in 1893, Henri Van Heurck's The Microscope. Van Heurck was one of the 19th Century's leading authorities on diatoms. Baxter was for some years the Treasurer of the Royal Microscopical Society, to whom, in the early 1900s, he presented several old microscopes which are now in the Museum of the History of Science in Oxford.

Baxter was a member of the archaeological societies of Middlesex, Surrey, Kent and Gloucestershire. However, his primary involvement was with Sussex Archaeological Society, who made him a Life Member in 1863. After his death, his collection of41 volumes of archaeological papers were also sold at auction.

After he retired from the law firm, various partners came and went, including his son Francis (Frank).  Although still listed as Wynne-Baxter and Keeble, the firm had separated from the Lewes office, and by 1937 the firm traded under the name Warburtons. By the 1940s the firm was so large that it was the official solicitor for Barclays Bank. Despite numerous mergers, the Wynne Baxter name didn't disappear entirely until 1972 when various companies incorporated under the same name and became known as Stafford, Clark and Co. A name change to Young, Jones, Hair and Co. in 1975 carried the firm forward to 1989 when it became Stafford, Young, Jones. In November 2019 they merged with Attwaters Jameson Hill who currently has five offices across London, Hertfordshire and Essex.

The Lewes practice, run from Albion Street by Reggie until he died in 1939, still survives of course. In 1970 the firm was renamed Wynne Baxter, Hillman and Carter, reverting to Wynne Baxter from the tongue-twisting Wynne Baxter Godfree with Selwood Leathes Hooper in 2001. In 2007, the firm merged with Mayo & Perkins to form Mayo Wynne Baxter. Today the firm employs around 200 people across eight locations in Sussex and is a UK Top 200 law firm.

Wynne Baxter never lost touch with his Lewesian roots and all six of his children were born there. Following the death of  William Nevill, 1st Marquess of Abergavenny and Earl of Lewes in 1915, the trustees of his estate sold off some of his lands in Lewes. This was likely to pay the death duties, and Wynne Baxter took this opportunity to do some good. He purchased an area of land from the estate known as the Pells on 11th March 1920, and in June of that year he donated to the people of Lewes for it to be used as a 'public pleasure resort'. This generous gift completed a park close to the River Ouse which included the Pells lake, the recreation ground, and the now-famous Pells Pool.

Aged 76 Baxter's failing health was becoming a cause for concern, and there were reports of his impending retirement. Finally, after the third inquest of the day at Poplar Coroner's Court on Wednesday 15th September 1920, Wynne Edwin Baxter suffered a heart attack and collapsed. He was rushed to his home in Stoke Newington where he was confined to bed but died at 9am on 1st  October.

The funeral took place five days later at the same church where he had been married to his wife, Kate, 52 years earlier. The coffin was adorned with massive brass fittings and covered in floral tributes. It was taken to the church on a wheeled hand-bier from 170 Church Street, with mourners following on foot in silence. Along the route, the blinds of private homes were drawn. The Public Library and many shops shut and covered their windows with black boards out of respect. The church bells of St Mary's where the service was held, played Abide With Me as the procession approached. Hundreds attended the service in the church where Baxter had been Warden for 25 years. Dignitaries came from far and wide.

Afterwards, the cortege left for Lewes. There, a brief service was presided over by Reverend Mackay-Clarke, Rector of All Saints, before the body was interred in the family vault. The family mourners were Reggie, Katie and Frank, Wynne's sister Edith and brother in law Frederick Harrild, along with the Mayor of Lewes and a complete set of members of the Corporation. Among the dozens of floral tributes was one inscribed "In loving memory, from the officers and men of H Division, Metropolitan Police".

The flag at Lewes Town Hall was flown at half-mast in recognition of Baxter's contribution to his place of birth.

Whilst researching this, it has been challenging to get a real picture of what Wynne Baxter was like as a man, but following his death, the Hackney and Stoke Newington Recorder wrote this about him:

"Reviewing his career and his many associations with public life, a characteristic which stands out pre-eminent is the unbounded energy which he always displayed in all his undertakings. No task was too great, and the driving force of his indefatigable zeal and resourcefulness was an inspiration to many. At all times courteous and accommodating, and ever ready with kindly sympathy and advice he made hosts of friends, and in his quiet unassuming way he endeared himself to all with whom he came in contact. Possessed of an even and jovial temper, he was ideally suited for the position of Coroner, which he held for so many years. No matter what the nature of his inquiries was, and no matter how excited witnesses became when giving evidence before him he always maintained the placid manner and unruffled demeanour which stamped him as a man of cool and calculating mind."